The Wilcoxon test is used for testing the difference between two attributes of objects, characteristics of respondents or features of situations.

When is the Wilcoxon test used?

The calculations in the Wilcoxon test

To apply the test you need to have two variables that have been measured at an ordinal, interval or ratio level. In our first research question these are satisfaction with the front of the house and satisfaction with the back of the house. In the second example the two variables are appreciation of the weather in April and appreciation of the weather in November. In the third example, it is the performance of the cars before and after getting new oil. Take care of the criterium that both variables are measured on a scale with the same range.

After detecting the variables and the levels of the data, the Wilcoxon W can be computed. This is best explained with an example. Fourteen people may score the weather in April and November on a five point Likert scale. The research question is whether the appreciation of the weather differs between these two months. The data are shown below. Out of these data a W-score is computed. An equal score (a tie) is not taken into account. The differences can be either positive or negative. The ranking is made based on the absolute values, and of these scores only the negative scores are summed. 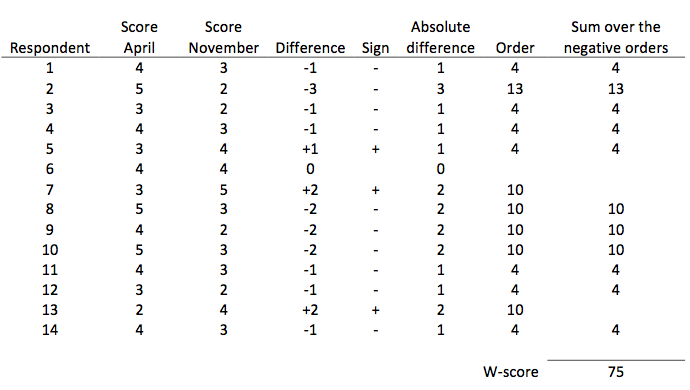 This W is tested with this formula:

As you can see, the result is a z-sore. And this calculated score is compared with the critical score of the standard normal distribution. If this is abracadabra to you, I recommend you to read our manual about the statistical test procedure or to buy a good textbook about statistics.

Final remarks about the Wilcoxon test

The Wilcoxon test can be performed with small numbers. If there are a lot of objects or respondents, say over 30, also a t-test pairs can be applied.

If there are three or more attributes / characteristics / features a Friedman test should be used.

Deepen your knowledge to improve your research: