A variable is a general name for attributes of objects. The value of a variable can change for every object.

All objects and subjects have attributes. Some attributes are for (a group of objectives) equal and others make the object or subject unique. Human beings for instance have characteristics like a head and a body but they differ in eye colour, length, intelligence, educational level, age and so on. The attributes a scientist takes into account for his research, are called the variables. So a variable is the general name for attributes of objects or subjects.

Each variable has different values. The colour of eyes can be blue, grey, brown, green or a mixture. The age of a subject is another variable. For each object the scientist writes the value of the variable in a database. He should do that properly and systematically so comparing attributes between objects can be done easily. Suppose that the scientist puts all his data in excel. Then in the first row he writes the variable names. In the first column he writes the names or an identification number of each subject. After each object he fills in the value or text for each attribute. If there isn’t a value the cell is left blank. 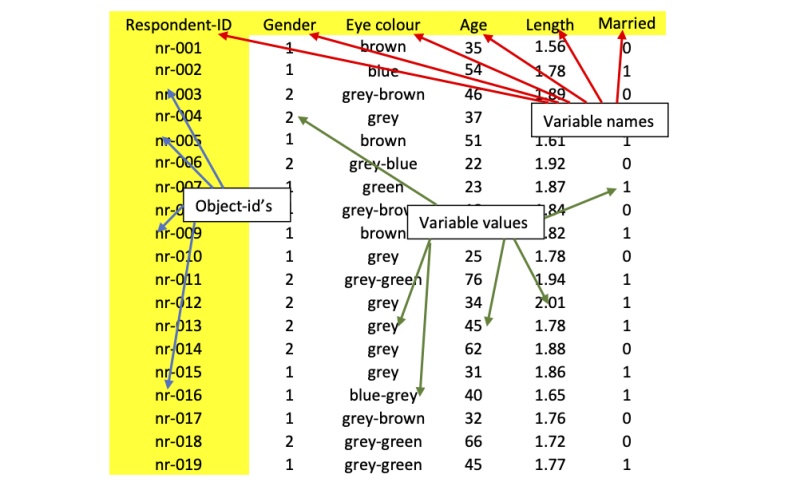 Most of the time only numbers are filled in in the cells, because most statistical programs for analyzing data only work with numbers. As you can imagine it will become very difficult to remember what each number means. Not only for the scientist who is doing the research but for everyone else who wants to check the data, the numbers need to be giving a meaning. This is done in the codebook. You can read more about that on our site page called codebook.

As noticed before a variable can have different values. It variates. Therefor it is a variable. If it doesn’t variate it would be a constant. In research a constant isn’t very useful except for checking the data. For instance, I f you only want response from females the corresponding code in the dataset should only indicate the respondent is female. All male respondents can be excluded. So, when you start analyzing the data, this will be a constant and that is what you wanted. Nothing more can be done with it, so it even might be removed from the dataset before you start analyzing.

Variables can be classified in different ways. An important classification is that of the way in which they are measured. A distinction is made between four levels: measured at nominal, ordinal, interval or ratio level. According to a classification based on statistics, there are only three levels: nominal, ordinal and continuous.