Scientific research is research that is done in accordance with the rules of that scientific field.

The behaviour of a scientific researcher

It is obvious that research has something to do with searching, and searching has something to do with finding. Everybody looks for things once in a while. And everybody does research now and then. Entrepreneurs look in their administration to find the best ways to earn a profit. Teachers try to find out the best way to teach. Journalists interview people to find out what happened. Usually, these types of behaviour are not seen as research, and certainly not as a scientific research. However if a scientist performs the same actions, it suddenly becomes scientific. Isn’t that weird? Besides that, scientific research can be done in a poorly way or in an excellent way. If it is done poorly, it looks as if it was performed by an amateur. In my opinion a clear distinction between research done by scientists and done by amateurs is not easily made. It is more a floating distinction. The more scientific rules are followed, the more the research can be described as scientific. Just draw a line and any research can be pinpointed somewhere on the line in the percentage of following the scientific rules:

Now what are these rules? Well, that is generally not clear. The rules about how to act are called the methodology of research. In various scientific fields these rules differ. A scientist in physics has to follow other rules than scientists in history, in the social sciences or in medicine. These differences are great when we look at the details. With a more general vision, scientific research behaviour is always the same. In general, all actions to be taken to conduct scientific research are in accordance with this model: 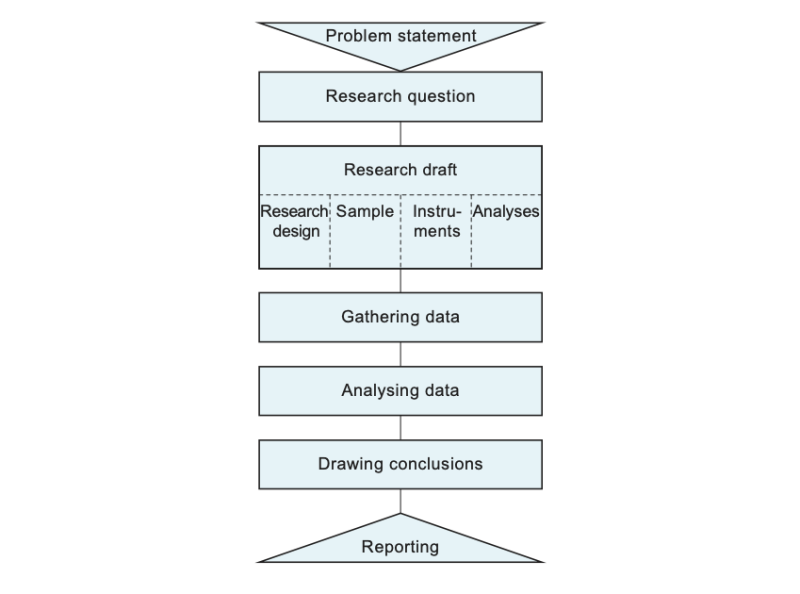 3)  Describe the way how to answer this question by:

a) describing the research design;

b) describing the population, the way of sampling and the objected response;

c) describing the instruments that will be used for gathering the information;

d) describing the way the data are going to be analysed.

7) Write it all down in a paper (or alternatives) and publish this information for general use.

In this online dictionary almost all aspects of this model are explained. I hope it will help you to become a better (a more scientific) researcher.

In scientific research a theory is used

An advantage of a scientist is that he is more familiar with the theories about the phenomena in the field. Therefore he can skip research questions that have already been explored thoroughly. Besides he is more able to formulate research questions. This is a general agreement, but can be criticized too. How much theory is needed to do research and aren’t theories disabling alternative views?

Some scientists have the idea that research can only be done based on a well-defined theory. From this theory a hypothesis should be subtracted, and this hypothesis should be tested in the empery. This can be called theory driven research. Fifty years ago this was the basic attitude for scientists and even nowadays some researchers work only in this way. This is a typically prejudiced view for looking at the phenomena in the empery. In my opinion this kind of research is theory testing, and it is not acquiring knowledge about how things are and work in reality.

Contrary some scientists do their research with a minimum of theoretical knowledge. They collect a lot of data and try to explain this afterwards with a theory. This can be called phenomena driven research. This kind of research is used in for instance big data. The problem with this kind of research is that some data might show covariance, but make no sense. They cannot be explained in a theoretical way. Besides that, due to the minimum of theory some views might be ignored, some relevant data are not collected or collected in a different way compared to all other theories. This makes the research incomparable and it will not help to acquire more scientific knowledge.

In my opinion you should make use of theories and read as much as you can about the topic of the research, but feel free to add your own vision. Read more about this on my page theory.

Another aspect of scientific research should be mentioned. In science the function of research is finding general rules and knowledge. It should be of general use and should not be kept secret for personal use. Some research however is not done for general rules or knowledge, but has a practical use for a specific person (or object) in a specific situation. These researches are called case studies. Case studies can be done in accordance with the scientific rules, but they don’t necessary lead to generally applicable knowledge. Very often the conclusions drawn from these studies are disqualified as non-scientific. However combining the results and conclusions from several case studies, general knowledge might come up which is very useful too.

A lot of discussion has been going on (and is still going on) about the status of case studies compared to qualitative and quantitative studies. In my opinion all kinds of research are useful for acquiring knowledge about the empery. I will never make a statement that one kind of research is superior to all others. It totally depends on the research question which kind of research should be applied.

And finally, scientific research can be distinguished in a fundamental and a practical aspect. Fundamental research is totally based on a theory; maybe practical issues can be deduced or explained with it, but the scientist does not think about these implications. (For instance: what is the structure of neurons.) Practical research is done in order to apply the results or conclusions immediately. The scientist is not interested in making a contribution to a theory. (For instance: how can we help John to reduce his epileptic attacks.)